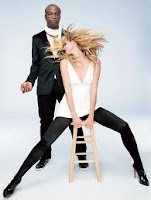 It's been a few months now but I can't seem to shake the break up between Seal and Heidi Klum. Before you rush off to another blog post, hold the phone. I'm not saying my heart aches for those two crazy kids, but it's the whole renewing of the marital vows that causes me to shake my head with knitted brow. For those of you outside the celebrity loop, the former happy couple used to renew their marriage vows every year.

'Gag us with a spoon', to borrow a quote from the San Fernando Valley circa 1980's. Alas, the self indulgent public display of a perfect marriage could not be saved by the ritual. Let's be honest, doesn't this fall into the same category of 'me thinks ye doth protest too much?" But, slightly amended to 'me thinks ye doth renew too much because thine marriage days are numbered'. The move also belongs in the 'look at us, we're blowhards in need of severe attention' category.
But let's peel back the layers of this decadent onion shall we, for I am curious as to how it works? The vow, for example. Do you write new vows or do you roll with the originals? If the original vow(s) is working for you, don't change it, right? However, ripping through the same old vow would become tedious to say the least, would it not? And what about the wedding party? Do you invite the same people every year? We all know how sensitive and down right stupid people can get over this lovely day. Keeping the roster the same would insure that no one is offended. And do the bridesmaids want to be bridesmaids every year? One would hope that Heidi Klum, the queen of Project Runway would no doubt put her gal pals in some sweet threads to be sure. Or, would it be a pain in the ass for the ladies to have to head back to the treadmill every 6 months prior to the ceremony seeing as they'll be standing beside a former super model...every year...Gee thanks.
And what about the wedding band? Do Seal's guys get the gig? And if they do, do they have to do it for free as a good gesture to their boss? That would suck for them. Do you know how much a wedding band can charge for a celebrity wedding? And if Seal's guys don't get the gig are they insulted? "What, aren't we good enough for you?" They'd ask. And what if you're some wedding band plucked out of the yellow pages? You're the lead singer all fired up at the prospect of singing to Victoria's Secret models when it dons on you that you'll be singing for Seal! Doh! Talk about pressure.
And now onto the the caterer. If you're the caterer you've probably had to low ball your estimate to get the gig. So now you've got a celebrity client who no doubt will need special, shall we say, maintenance and there you are getting short changed. Yet, all the other catering companies envy you. This in turn forces you to play it up at cocktail parties with other caterers. It's just good business after all. (And as an aside, who caters the caterers party anyway?)

So where are we at? We have a yearly display of 'look how much in love we are and for the love of god, pleeeeeease envy us!' We have a wedding party that if surveryed I bet would come down around 65% don't want to be there. We have a boat load of employees; the wedding band, caterers etc. who need the gig, even if they have to take it in the shorts financially. Roll all of this into a sandwich of attention getting, red carpet wannbe-ism only to find that its done; the party is literally over.
The Bottom Line
Don't sicken others with exaggerated public displays of affection and numerous vow renewals you're just putting your relationship behind the eight ball. But, if you must put us all through your decadent fantasy make sure to put the bridesmaids in nice digs and pay your employees a decent buck. But who are the winners here? The guys, dolls, men and women on the outside that's who. The everyday John and Jane Doe. The people who go about their business keeping it real day in and day out who become mildly amused and slightly irritated by celebrity stories like these. I'm talking about me and You! We are the norm. Stay strong ye of the non-renew and single-vow for, a true vow need only be sworn...once.