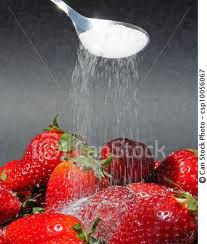 Does anyone remember the commercials for the dietary supplement called Sensa? A lovely plate of food was displayed. Next, a slender female hand spread some mystery (and perhaps magical) crystals over the meal. The voiceover claimed that the crystals caused weight loss. Oh happy day for us all right? Well as it turns out Sensa must pay the state of California as well as some consumers just north of $900,000.

Let's break it down shall we. You may be surprised to know, at least I was, that the Food & Drug Association does not regulate supplements such as the type Sensa pedals. What this means is that the product is not tested for safety or effectiveness. Let the market do what it does, no? So if I may be so bold as to play the advocate to the devil; what did Sensa do wrong? It's perfectly legal for this company to not only bring their product to market but they can pretty much claim whatever they want about it. And they did just that, they claimed 'hey man if ya wanna lose that spare tire go ahead and drop this dietary fairy dust on your burgers, you'll be glad ya did.'

But sadly a pooch was screwed and here's where. They should never have made the 'scientific' claim that the item underwent "the largest clinical study"because a plaintiff arose and called b.s. and a class action suit was born. In the end the alleged science turned out to be false advertising and FDA or not we the consumer are protected against that.

So how does it work? I tipped toed around Sensa's website and learned that the magic dust enhances one's sense of smell and taste thus fooling the brain's 'natural hunger control switch' into believing it's full. Being that I couldn't recall the "hunger switch" from Biology 11 I dug into the research for close to 38 seconds and found that we in fact do have a 'natural appetite control' mechanism that once we're  full let's the hypothalamus know that we're done. (I've always like the hypothalamus-sounds like a dinosaur-meets-Viking-dragon-slayer kind of name).

Apparently the mechanism worked gang busters in our hunter-gatherer days of fight or flight and all of that. But today with food everywhere, (in the first world anyway) anytime we want it, many of us have managed to recalibrate the stop eating I'm full already mechanism and thus find ourselves overweight. It's as if we say, "Yo, hypothalamus why don't you take tonight off and let daddy and his eating utensils take it from here? Thanks buddy."

Where are we now? Let's be honest this is just more of the search for the magic pill. These pills, sprinkles and shakes aren't going anywhere anytime soon so long as western human nature is the way it is. We want what we want and we want it now. It ain't nothing new but ponder this: The consumers of Sensa are lucky that this product was not harmful...so far. You've got to use your heads people. This stuff is not tested by the FDA which is an entity that is average at best on a good day. I'm not saying they're sloppy; at times look the other way and can be bought but I ain't saying the converse either...are ya with me? These supplements are created for the sole purpose of commerce. It's capitalism baby and this sh** ain't regulated. So don't toss it into your bodies willy nilly just because a manicured hand gingerly sprinkles it on a tasty looking meal. For the love of Caesar's ghost do what makes sense...not sensa!
Posted by JB at 11:17 AM No comments:

Los Angeles: Where The Citizen Is Mightier Than The Turn Signal

What is it about the Los Angelino driver and his or her penchant for not signaling when they are about to turn? Are we--meaning you--so entirely over-worked that the mere thought of moving your hand from your cell phone to your indicator would send you into a narcoleptic coma? Or maybe it is beneath you to alert the guy behind you that you're about to maneuver 3000 lbs. of heavy metal and horsepower into a different lane. Maybe you're better than you're turn signal altogether and your day starts something like this:

"Listen to me turn signal indicator thing, I'm better than you and thus...I shan't be using you today!"

During my period of perplexity and pissed-offery I tried desperately to discover who this person is? Also, where do they hail from and how can we send them packin'?

Perhaps you're a 19 year old co-ed named Tina from Manhattan Beach. Once you grow out your bangs and get your highlights done you'll be hotter than your BFF Brittany. When driving your mom's Mercedes S.U.V. you absolutely have to text Brittany to let her know that Brianna was talking trash about her OMG! And thus, no way do you have time to signal your turns, don't make you LOL!

Or maybe you're a dude named Jeremy that's put the days of being bullied behind you. In the process you've changed your name to Blade and become a cage fighter. Your record is 4 wins, 4 loses and one tie...not exactly a winning record but hey, you'll get there. You're a tough guy that plays by your own rules. And rule number one is: never signal. Signaling is for sissies. As a matter of fact once you put some dough together you're going drive that GMC pickup straight to the dealership and have them lift that truck...and then remove your signal apparatus.

But, you might be Robert Montague, visiting British professor of elocution and guest lecturer at UCLA. When you step into your rented mini cooper in the morning you proclaim that if the American commuter is too dim of wit to know of your vehicular intention then...well...tough biscuits. It shall not cause you worry and thus you will not bother yourself to signal. Whoever you are I urge that you wake up and see the dimwitted logic of not letting us know what your friggin' plan is. Because if we hit you, sure we're at fault but its still a pain in the ass (literally for you) for all parties involved to deal with insurance companies and so on. But there's another factor at play here and that is entitlement and freedom. Or as I like to say, "freetitlement''. You feel that you are entitled to ride around in your bubble and talk on the phone; text via phone and NOT have to expend the energy it takes to give your fellow man a 'heads up.' And why is this? It's because your notion of this being a free country means that you are free to do what you want...or don't want to do.

Offending drivers beware because when I'm the Mayor of everything and everywhere the fine for not signaling will be doubled; the same way fines are doubled when they occur in construction zones. And here's how the proceeds from your infraction will be dispersed. The first quarter of the ticket money will go to the city, for cops' salaries and pot holes etc. The second quarter of the money will go to improvements to the Los Angeles airport (LAX) which is the worst airport in the first world. The third quarter of the money will go to the running of my mayor's office-naturally. And the remaining proceeds will go to local small businesses such as breweries that do NOT brew lite or light beer. Furthermore as Mayor of everything and everywhere I will see to it that there is a chicken in every pot and a copy of Crescendo by Jonathan Brown--available on Amazon in every home.
Posted by JB at 2:16 PM No comments: