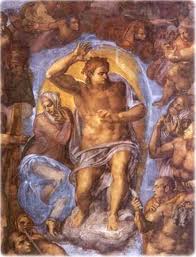 My wife and I were in Rome recently. And I'm here to tell you that this city is more beautiful than people say it is. The visuals are beyond incredible; and I don't even know if that's proper English. The most pleasant surprise for me was the Sistine Chapel. Originally I didn't really want to visit the Vatican. Give me the sights, the architecture and wrap it all up with the Colosseum and a few Italian beers and I'm good to go. But they tell me a good marriage consists of compromise and I believe 'em. I wanted the Colosseum; the wife the Vatican alas, we did both. We found a three hour tour (which incidentally is two hours beyond my usual limit...but when in Rome...) and away we went. As expected we joined just shy of three million other tours and crowded through gorgeous buildings with gorgeous paintings and sculptures etc.

It was hot; there were far too many people; our group kept having to stop for numerous head counts and we always lost someone. You wouldn't have believed we were an adult group. And when I stated as much I got a few laughs. Being one who likes to entertain himself I tossed out a few more corny jokes; hell, in my mind I was a regular Rodney Dangerfield.

When we got to the last leg of the tour our guide along with several P.A. announcements in every language told us there were to be just two rules, count 'em two, regarding entry into the Sistine Chapel. Number one: no pictures whatsever-no cameras, no cell phone pics, not even a 1970's child's viewfinder; nothing! Rule number two: absolute silence, no talking, no whispering. Don't even think out loud.

Everybody nods, everybody is on board, everybody gets it. We enter. The room is dark and cooler than the rest of the tour. This is to preserve the art work and centuries old paint. The place has maybe 800 people in it. The security guards of which there were many tell everyone to be quiet because it's difficult not to exclaim  something upon entry. This was the most amazing sight I'd ever seen. To see it in books and movies ain't nothin' baby. I was moved. This was the closest I'd ever been to witnessing a miracle. I could have stared for an hour. That was until my fellow man let me down to a depth that I was almost moved to violence. People started talking. They were shushed. People started sneaking pictures. Security came calling and reminded them of rule number two. My immediate thought was that perhaps people didn't understand. Nope, turns out the world over understands 'shush' but then pipes right up again. I then thought it was the younger generation. And it was but it was not only them it was cats even older than me. I caught the eye of a dude in his 50's taking a picture with a flash. I signaled for him to knock it off and he just looked at me defiant. His look said 'what are you going to do about it?' I nearly throttled him...but I'm not a violent guy. I could not believe that the beauty that was on the ceiling was unable to move people to observe and enjoy; to soak it all in.

WHY? I asked myself. By the time I left I had my answer. We live in a time where people of all colors, cultures and genders have a universal feeling of ME-ism. It's all about me. If I want to talk before this amazing wonder of the world than I shall. If I want to take a picture regardless of your rules, I shall. It is 2012 and it's about my freedom, my desires, my entitlement; its all about ME! There I was a rough and tumble rocker who didn't really want to be there in the beginning and I was moved to awe. Awe, I tell you. . You might be thinking 'hey, maybe others were not moved like you were'. And to this I say, fine. But during the parts of the tour or any other tour I've attended where I wasn't awed I didn't and I don't break the rules. What am I a toddler? And why don't I break those rules? Because it's not all about me. If you're didggin' it then have at er' and I won't disturb you. People don't want to play by the rules anymore. Doing what you want and getting what you want seems to be applauded in today's society and ladies and gentlemen it sickens me. Word to the wise, or rather, word from the wise to you dummies; respect it! Whether you understand it or not; respect it!

Eventually I calmed my nerves which was easy to do when one gazes at that ceiling and when one is accompanied by his hot wife. The very last stop was a fifteen minute jaunt to the gift shop. The Vatican is down with commerce apparently. Lo and behold at the back of the shop which was chalk full of the tackiest jazz you'd ever see was a tiny espresso bar which had beer. Suddenly the world was becoming good again. I tossed out another corny joke about me, the Pope and beer. Then I purchased a Peroni beer and took a long, hard well deserved pull. The beer half done I turned to my wife and said, "Babydoll, I love the Vatican!"
Posted by JB at 8:09 AM No comments: