Get Your Rhythm Right!!! 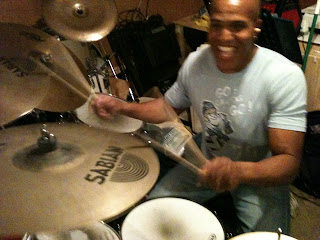 In 2003 my mother passed away. As we were planning her funeral with the funeral director I asked if he could rent me a drum set. He said yes. After the meeting my brother asked if I was going to play a solo. I responded, "I guess so. I think that's what mom wants me to do."

The ceremony went ahead and somewhere in the middle of the speeches I got up and played. When I was finished the tears came on strong. After the ceremony was done and people hugged and consoled--my father approached. He paid me a very nice compliment about my piece and then he blew my mind.

He said, "Son, that was excellent but I feel that it was a duet."

"I think your mother was playing with you, it sounded that way," he replied.

Naturally more tears came and for two reasons. Number one was that my dad was never really the type to talk in such spiritual terms, at least not to me, and I'm a real spiritual Cat. And two; in the middle of my solo I remember (like it was yesterday) looking at my hands with the sticks in them and they just floated across the drums…but I wasn't the one playing. I wasn't in control. How the hell did my father hear that? It's because my dad had a very strong rhythm beating within him and he knew what he heard. That is the only explanation.

My father passed away a few short weeks ago. When I was a kid my father told me that I marched to my own drum. I was too young to know what he meant but I loved the sound of it. My wife and I returned home and began planning for the service along side a whole host of amazing participants. My initial plan was to play an African Djembe for my father but the only rental drums available were 12'' in diameter. That wouldn't cut it…not for what my dad deserved. Then it hit me; duh…why don't I rent a full drum set again and play my dad on into heaven? Again; duh!

With my mother's solo I had a loose plan of what to play before I sat down. With my dad I went without a plan. I knew that one or both of my parents would join me on that stage and we'd make music with the gift they and God gave me. I wasn't worried at all about stage freight or freezing up or not being able to see the drums due to tear-filled eyes. (It can be done with eyes closed if necessary). 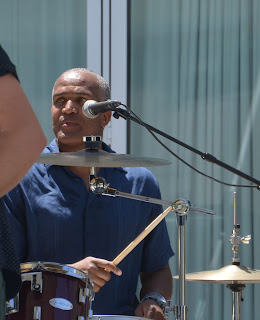 I sat down and let my hands and feet do what they wanted. I threw in some jazz because my dad was a huge Big Band kinda guy and then moved into some African rhythms with an audible, "Let's go Daddy-O!" (Not sure where that came from but I felt as though I was leading our two-man rhythmical platoon. All I had to do was get him to Heaven's gates…and my music would suffice as cover charge).

I called my solo "For Daddy-O" because that's what I called him even though he didn't really approve at first. I wasn't worried about whether the solo was going to be good or not. I knew it was. That's not a brag, it's a comment about rhythm. I'm not the world's greatest drummer, far from it. But my rhythm is right. I have good rhythm. My father had good rhythm. He had a rhythm to his walk that was cool; a rhythm to his speech that was musical and thus also cool. My Pop was just plain cool…because his rhythm was right. He was more charitable then even I ever knew. Why? Because his rhythm was right.

Rhythm is in everything we do. It's in your walk, how you brush your teeth, how you run, it's in your pattern of speech and it's also present in how you treat others. Rhythm is also beating inside that chest of yours at this very moment. You literally have a bass drum pounding inside you keeping your pilot light on.

Have you ever had a day where you felt you were 'out of sorts?' Guess what? Your rhythm was off. Have you ever done something you knew was wrong but did it anyway? You probably thought it was your conscience nagging at you while you did it. Well, I'm here to tell you that your conscience has rhythm and when you're acting 'wrong' that bad music in your ears is your off-beat rhythm baby!

There are a million more examples where rhythm rules the day but I won't go into them here. But getting back to my solo I knew my rhythm was right because my dad and I had many ups and many downs but we survived them all to come out smiling on the other side. And in his last remaining years we smiled and laughed for the majority of our visits. Our rhythm…was right. 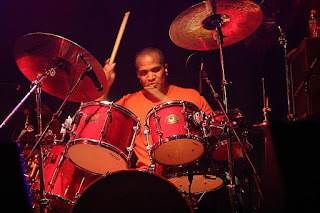 I did not feel as though my mother or father took over my limbs when I played for my dad at his service. However, I did feel my parents hovering just above my head watching; toes tapping, heads bopping and smiles bigger than Buddha's. I know they were proud. I know this because of the love and support they'd given me over the years; and believe me it couldn't have been easy to love a struggling musician, Yikes!

I've missed my mother since the day she left and now I miss my dad--Daddy-O as well. But I will move on as a better man because of everything my folks gave me, taught me and sacrificed for me. I'll aways be thankful that they let me march to my own drum…that they let me find my rhythm. Because when the rhythm is right, then there is love. And when there is love...
Posted by JB at 12:26 PM 3 comments: