Trouble With The Food Chain

I'm not usually a cat who watches videos on Facebook. It's not that they're beneath me but I've been known to sit down with the intent to watch one video then come up for air 90 minutes and 12 videos later. Dang, time wasted again. However, the other morning I clicked on a video where a group of people protested a bullfight in Spain. Sixty or so protesters charged into the ring just before the 'festivities' were about to start. They sat in a circle and linked arms. 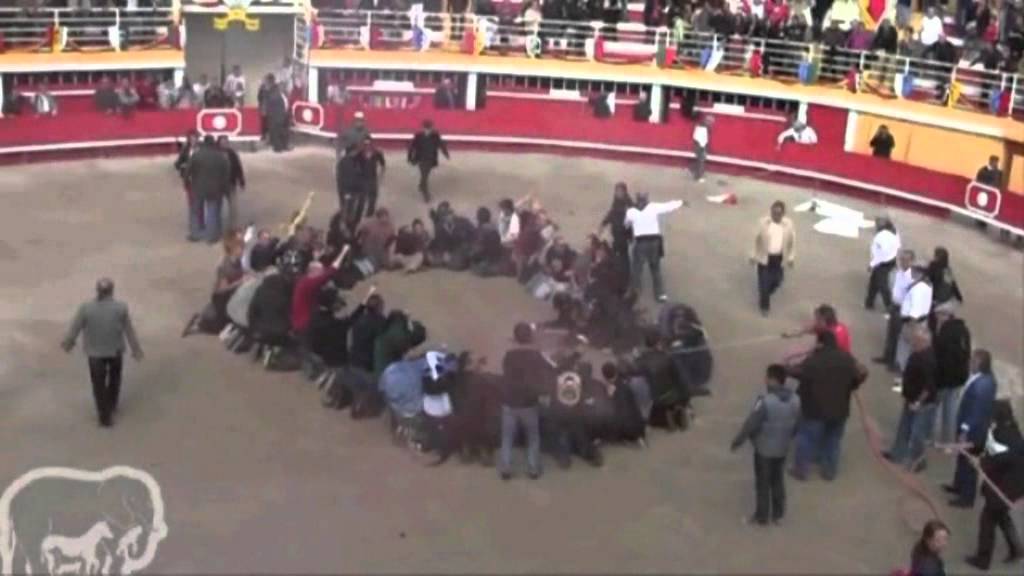 The plan seemed sound. There was nowhere for the matador to stand (and preen). And surely humanity would prevent the event hosts from loosing the bull on innocent people, right? As I said: the plan was sound. I'm happy to say that the bull was not set on these people which puts them a half notch above the (alleged) Romans of yesteryear that released lions on the defenseless christians. The good news is that those in charge of the 'sport' didn't let the bull into the ring with those people because they were human after all. The bad news is that well, they were human…after all. The organizers and fans of the bullfight game went to that deep primal place were some believe evil may rest.

The first man to attempt locking down the situation was a large security guard. He tried to break the human chain. When that failed her went to plan B which was throwing overhand right punches--what those into the human fight game refer to as 'haymakers.' The protesters were at a distinct disadvantage as their circle faced inward so their backs were to the security guard. Oh yeah, and they were seated. As with many protest sights one can see on the daily news next came the water hoses. Anybody remember the civil rights days of the 60's in this country? Um Hmm, we're talking learned behaviors here folks.

By this time more security guards arrive along with growing numbers of bullfight supporters. Tempers flared. The guards and fans weren't having anything to do with this protest nonsense and thus stepped down to the next rung of the those-without-conscience-ladder bringing them closer to indecency and cruelty. What is the next rung you ask? Simply put; when water and fists don't work its time to put the boots to work. I mean heck them boots are already on the ground for heaven sake. Let the kicking and stomping begin. Ironically the fray is now more brutal than the actual bullfight would have been. No? I lost you? I'm speaking from a psychological aspect. You might feel that slowly skewering a bull to death is gruesome and it is but this is man-beating-man in broad daylight with impunity. Still unconvinced? Ok read on.

Here is where my blood boiled and my stomach began to turn. A healthy 99% of those attempting to protect their 'sport' were men. And let's say a conservative 85% of those attacked were…wait for it…women. Don't get me wrong I despise what would have happened to the bull but this? Men in cowboy boots kicking seated women, yes SEATED women in the backs of their heads? So add to my boiling blood; hands locked into fists, heavy breathing and a jaw clenching so tight that my back molars begged me to knock it off. I continued watching.

At one point a man in a suit literally pulls a t-shirt from a woman's torso. Now this was not done in the style of asking her to lift her arms so he could gently remove the garment no, he yanked from above until it tore. But this esteemed prick wasn't done yet. In his mind he hadn't taught her the entire lesson. Just when I'd seen it all the S.O.B. doubled back and grabbed her bra and pulled with everything he had. I'm no woman but obviously this would be extremely painful and terrifying.

Man. Man vs. Animal. Let's take a look shall we? When lions attack a herd of wildebeest, let's say, the  lions will target the weak--the young or the slow. Prior to flight the herd tries to keep the weak to the center and hold the herd tight as a massive unit. The male protesters did their best to retrieve the women that were dragged (often by the hair) back to the group. The protest busters continued to hammer, beat and humiliate the women (and some men).

Here's where there's trouble with the food chain and where the lion rises above these particular men in the food chain. The lions are hunting for their survival. These dimwitted brutal characterless bastards are what? What's their excuse? They are operating from something down deep within them and that is hatred. A hatred of women. It's open season on women and keep in mind this video is mere minutes. This means that these abusers went from "hey, don't interrupt my blood sport," to "Bit** I'm going to make you pay…in broad daylight…in an era where every phone has a camera and a thousand live onlookers are present." Is that hatred enough for you?

Also keep in mind that each and every one of these men have mothers; some have wives or girlfriends and some even have daughters. And still--

This putrid hate is actually not buried deep, rather it  runs deep and simmers just beneath the first layer of skin. These abusers are not men. They are not boys and they are certainly not toddlers because toddlers start out from a place of innocence. I don't know what they are to be honest; can't get my head around it. And if they hold a spot on the food chain their position is not only beneath the lion it is far beneath that of the cockroach.

I have no solution to this problem but I do have a suggestion as to where we could start. Parents. Parents all over the world need to take young boys by the hand and teach them that women are human beings to be loved and respected and that without them that little boy would not exist. Also parents, if at any time your boy shows the slightest sign of aggression aimed at women or girls: DO SOMETHING ABOUT IT!

Obviously it's not good to have hate in the heart and God and the Buddhist in me keeps that hate at bay... not to mention a little thing called love. But if I were granted a one day pass to Hateville I'd have to say that I absolutely hate bullfights. But not nearly as much as I hate men that abuse women. Furthermore, if I were granted a day to meet each and every one of those abusers in a different sort of combat ring...

Wow, that is pretty intense...women beaters are the worst...loved your words as always

Wow, that is pretty intense...women beaters are the worst...loved your words as always